In 1990, two restaurants that would come to change the course of Catalan catering received their second star: El Bulli and Can Fabes. The former garnered the award with an upcoming Ferran Adrià as chef; the latter with Santi Santamaría at the helm. In two very distinct ways they were the spearhead of a revolutionary generation that trenchantly believed in the product and freedom of creation. At Cala Montjoi, however, some key ideas were brewing that would rock the sector worldwide: the technical/conceptual discourse emerged, the kitchen became an R&D lab, its brigade was redefined as a creative team, and tableware shifted from being the canvas to part of the experience.

They were not alone in this: other chefs and coders included Carme Ruscalleda, who had opened her restaurant in the late 1980s, Fermí Puig, Jean Luc Figueres, Carles Gaig, Mey Hofmann, as well as other members of the "Young Lovers of Cooking" group including Àlex Montiel, Daniel Eek, Sergi Arola, Toni Massanés, Francesc Puntí, Andreu Roselló, Ignasi Montiel, Jordi Parramon, Josep Maria Baixas, Josep Berengué, Mariano Gonzalvo, Philippe Regol, Frederic Fernández and Emili Ametller; and the members of "The Cuisine of l'Empordanet", an association that still works together to promote the culinary diversity of the region.

The influence of nouvelle cuisine, exchanges with the Basque Country, the way that traditional cuisine had already been rethought years previously by Josep Mercader (Motel de l'Empordà), Francesc Fortí (El Racó d'en Binu), Ramon Cabau (Agut d'Avinyò), Paquita and Lolita Reixach (Hispània), Lluís Cruanyes (Eldorado Petit) and Josep Lladonosa (7portes), among others; the first Asian influence; new trade fairs and congresses such as the Gastronomic Forum; support from public bodies; the backing of specialist companies; media coverage, and a burgeoning public interest were the best nutrients for the fertile creativity of all those chefs who gave shape to Catalan haute cuisine. Throughout that decade practically all those involved in gastronomy started to think about a long-term strategy, not only as a local craft but also as an industry that could become a driver of the region's economy. Catalan cuisine in the late 20th century sparked an incipient interest in food writers and gourmands around the world, who suddenly had a new destination, just beneath the Pyrenees, to make their pilgrimage, to discover and to enjoy. Meanwhile, all of these ingredients inoculated future generations who would soon come to the fore with copious amounts of passion.

New rankings brought about a new international order which France was no longer at the heart of, giving decisive momentum to elBulli which was proclaimed World's Best Restaurant a whole five times (2002, 2006, 2007, 2008 and 2009). Ferran Adrià appeared on the covers of the New York Times Magazine, Le Monde and Time; was a keynote speaker at Google and Harvard, and became the highest authority in haute cuisine worldwide. A world of textures materialised (foams, hot jellies, airs, spherifications, etc.), physical and chemical processes took centre stage, the dining room began to play an active role in the diner's experience, and portions were reduced to the minimum to boost variety.

A healthy, motivating self-love gradually flourished among the chefs behind this new cuisine as they realised they were creating a new language based on both flavour and technique. As they built up their discourses, philosophies and praxis, they were also reaping the fruits of their labours. This was the three-star decade for elBulli and Can Fabes. The feud that began between them led to some one-upmanship and the reaffirmation of two trends which lives on today according to what is given more importance; the avant-garde (creative cuisine) or tradition (developmental cuisine).

These were the most revolutionary years for the chefs of the previous decade. Some also found new stages and audiences to take their new creative cuisine beyond Catalonia, such as Josep Barahona and Carme Ruscalleda in Tokyo, and Santi Santamaria and Alain Devahive, along with some the elBulli team, in Singapore.  In 2003, writer and gastronome Manuel Vázquez Montalbán died in Bangkok, but his legacy was kept alive by upcoming food writers who understood that it was a unique time for cuisine. The Year of Food, Cooking and Gastronomy (2005) was a key historical and institutional event that created a bridge and a platform between the creative movement and the Catalan public, with a broad programme that encompassed all fields, disciplines and types of food culture.

The start of this decade brought turmoil and tragedy. In 2011, the sudden death of Santi Santamaria left an emotional and professional void in the sector that is still felt today. Months later, elBulli served its last dinner - 'the last waltz' - before morphing into an even more paradigmatic project: Bullipedia; a platform for knowledge and creativity. The Adriàs also teamed up with the Iglesias brothers the same year to found elBarri and open their first establishments in Barcelona's Paral·lel district; today's mecca for foodies worldwide, where the Bullinian spirit is still brewing.

Although these two icons had departed, many of their disciples from both home and abroad took the reins, in Catalonia and internationally. From Girona, another band of brothers - the Rocas, entered the World's Best Restaurant top 50 in 2013, guaranteeing the succession and proving that Catalan cuisine was successful not only because of one restaurant but rather a collective project with strong convictions. Other outstanding chefs of the day include Paco Pérez, Jordi Cruz, Jordi Vilà, Mateu Casañas, Oriol Castro, Eduard Xatruch, Carles Abellan, Oriol Ivern, Fina Puigdevall, Carles Tejedor, Albert Raurich, Rafa Peña, Ada Parellada, Artur Martínez, Jordi Esteve, Romain Fornell, Iolanda Bustos, Jordi Herrera, the Torres brothers, Sergi de Meià, Dani Lechuga, Toni Romero, Marc Gascons, Òscar Manresa, Adelf Morales, and Víctor Quintillà, among many others who the public and the critics alike support in every new project.

At the birth of the new decade, all of them and a host of young emerging talents dispensed with labels and wrote a new page in Catalan cuisine; a page of their own striking a balance between tradition and creative freedom. Technique, once acquired, gave way to responsibility, which found a duo in flavour. The starting point for the new challenge was local produce and acknowledgement of local producers. The cuisine of the stars looked to the earth. 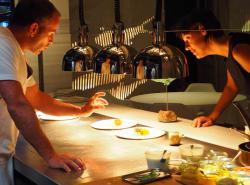 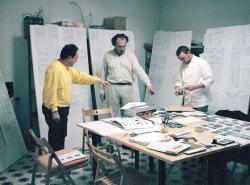