100 buyers from 28 non-EU countries will take part in rounds of negotiations with Catalan companies from the meat sector, from 9 to 10 Abril at the Espai Bital in Hospitalet de Llobregat.

The meat industry accounts for more than 32% of the agrifood sector’s annual turnover. Catalonia exports over 56% of the meat it produces, with a value of €3,250M.

The Ministry of Agriculture, Livestock, Fisheries and Food, working with Prodeca, and in conjunction with the business associations ANAFRIC, ASOPROVAC, ASSOCAT, FAC, FECIC, FECOC, and PORCAT, presents the 3rd Meat Business Forum, an event that puts companies from Catalonia’s meat sector directly in contact with buyers from tertiary markets.

Over two days, 9 and 10 April, the Meat Business Forum offers an extensive program, comprising meetings with representatives of the sector, round tables and B2B gatherings. Each meeting with potential clients will last 15 minutes and will follow a pre-established agenda provided in advance by the organizers in order to optimize commercial results for Catalan companies in the meat sector, who this year will be able to interview more than 100 buyers from 28 markets.

During the opening ceremony of the Meat Business Forum, on the morning of 9 April, Prodeca’s Managing Director, Ramon Sentmartí will present a talk on Export Orientation for the Catalan Agrifood Sector, and Carmel Mòdol, the Government of Catalonia’s General Director for Food, Quality, and Agrifood Industries will present the Report on the Meat Industry in Catalonia together with Josep Maria Gil, director of the Centre for Research on Agro-Food Economics and Development. The aim of these presentations is to show international buyers the potential of the meat and agrifood sectors in Catalonia and provide an introduction to the Catalan companies that will subsequently be involved in the rounds of meetings.

Programme of seminars on strategic markets

As well as the rounds of business meetings, Meat Business Forum will host a programme of seminars on different regions, with expert speakers. Attendees will be able to find out about data, projections and trends in the Middle East, Latin America and sub-Saharan Africa in the context of agrifood, in terms both of demand and distribution infrastructure. Prodeca’s aim in organising this programme of seminars is to place first-hand information about the potential of strategic and emerging markets at the disposition of agrifood businesses in Catalonia, to further the overseas expansion of the Catalan agri-food sector.

The seminar programme begins on the morning of 9 April with the topic The Middle East: Marketing Strategies for the Agrifood Sector. Introduced by the consul general of the UAE in Barcelona, and the Secretary-General for Agriculture, Livestock, Fisheries and Food in Catalunya, speakers include Xavier Albarracín, an expert in Muslim markets; the Head of the Prime Minister of the UAE’s Office for Food Security; the Vice President of the UAE’s Agthia Group; the CEO of Saudi group Americana Food; and a representative of Foodex Saudi, a key event for entry into the Saudi market’s agrifood sector.

In the afternoon, Raimundo Gómez Cuétara, an expert on Latin American markets, will lead the table LatAm: a High-Value Market, with the following speakers: Alfonso Velásquez, president of Adex, the Peruvian Exporters Association, ex-Minister for Production in Peru; Hugo Osvaldo León, Foreign Trade Manager of La Costa Patagónica, Argentina; and a representative of the Bolivian Chamber of Commerce.

The next morning, the seminar programme’s focus will be Africa: an Opportunity for Expansion, introduced by Sierra Leone’s Minister for Agriculture; the Undersecretary to the Government of the Republic of Guinea and President of Femmes des Terroirs; and the director of Prodeca, Ramon Sentmartí. The seminar will be led by the expert in African affairs Daniel Vives, who will be joined by the following speakers: Saikou Barry, Director General of African Business Consulting in the Republic of Guinea, Emmanuel Konjoh, Director General of Commerce and Industry in Sierra Leone, Emmanuel Chilufya, representative of the Zambian Chamber of Commerce, and Faustin Sompo, a government agent in the Democratic Republic of Congo.

The meat industry is Catalonia’s principal agrifood sector, with a turnover of €8,452M. It accounts for over 32% of the agrifood sector’s turnover as a whole, 40% in terms of employment and more than 19% of the total number of companies.

As a sector, it is increasingly oriented towards vertical integration, as a means of guaranteeing traceability from farm to point of sale, all while complying with the ever-stricter demands of the market.

Catalonia has consolidated its position as one of the most important producers on the European continent and in 2017 was ranked as the second-largest producer in Europe and the 10th-largest in the world. At the same time is the principal region of Spain for pig, cattle and poultry farming, and internationalisation is a key element in marketing what we produce. 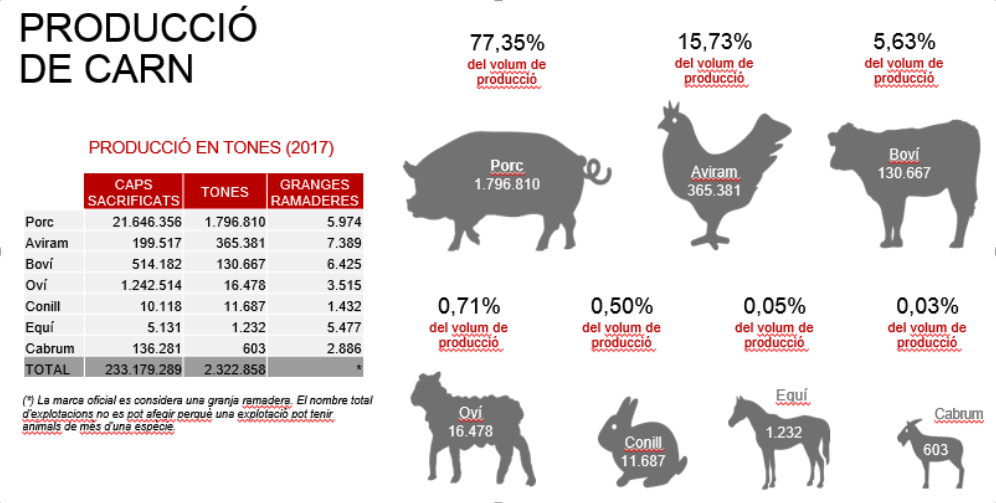 In fact, more than 56% of the meat produced in Catalonia is sold on foreign markets, which, taking meat products into account, represents a value of €3,252M, and a coverage rate of over 860%. Meat and meat product exports to third countries have increased in value by over 114% in the last 5 years, to reach a total of €981.52M in 2018. Pork represents 72% of meat exports in terms of both volume and value.

At the same time, Catalonia is a region with a long-established tradition of cured meat production, boasting a wide variety of high-quality products, which represent 5% of the volume and over 10% of the value of total exports. 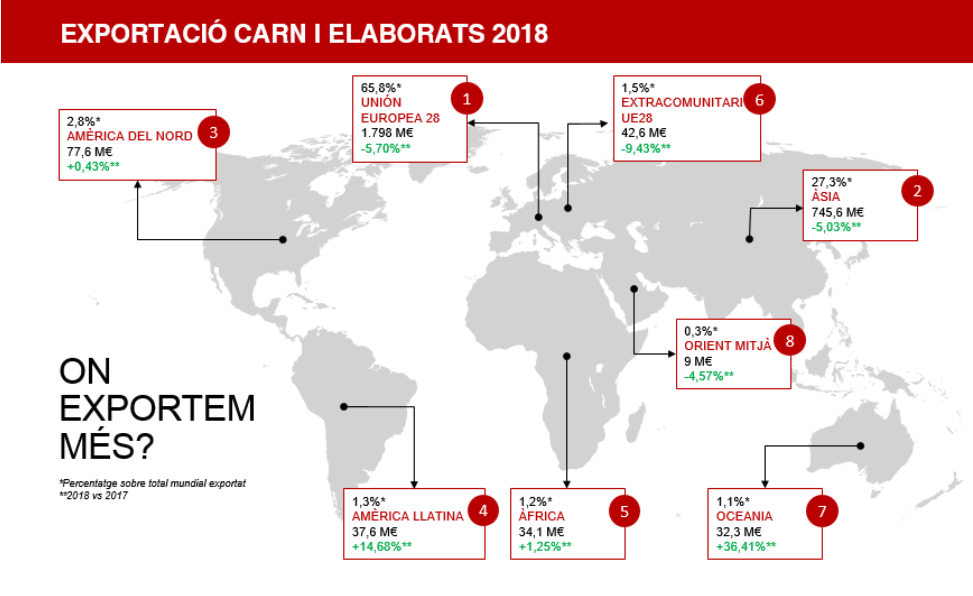 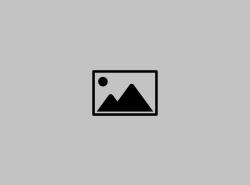